With a love for community, music and theater, July McClure continues to build on a dream.
In 1999 she opened the Tumbleweed Theater in Columbus NM just four miles from the border of Mexico where novice actors, musicians, playwrights, songwriters and comedians can be seen and heard in a permanent setting.
You won't want to miss this old historic building and the magic that is Tumbleweed Theater.

Tumbleweed has a perfect theatrical address, on Broadway, of course, in downtown Columbus, New Mexico. The Theater was originally founded in 1989. Tumbleweed’s first production was The Great Western Melodrama presented at Morgan Hall (now home to Deming Performing Arts Theater). It was a great success and whetted actors and audiences appetite for Theatrical events in Luna County.

The Theater group re-organized in 1992. The Theater had no home and like a noble band of gypsies presented outdoor melodramas at Martha’s Place (a Columbus Bed & Breakfast motel) in the summer. The troupe, however, needed a permanent place to perform its magic and finally moved to an old historic building at its present Broadway location in 1999. ... and then the quality of Tumbleweed productions shot skyward.

Over the years the theater has showcased a group of professional and novice actors, musicians, playwrights, songwriters and comedians.

Tumbleweed is well known for its quality productions and gourmet food. Tumbleweed members, through hard work and dedication, have brought a lot of laughter, joy and entertainment to an audience from the border to Texas and north beyond Silver City, NM. 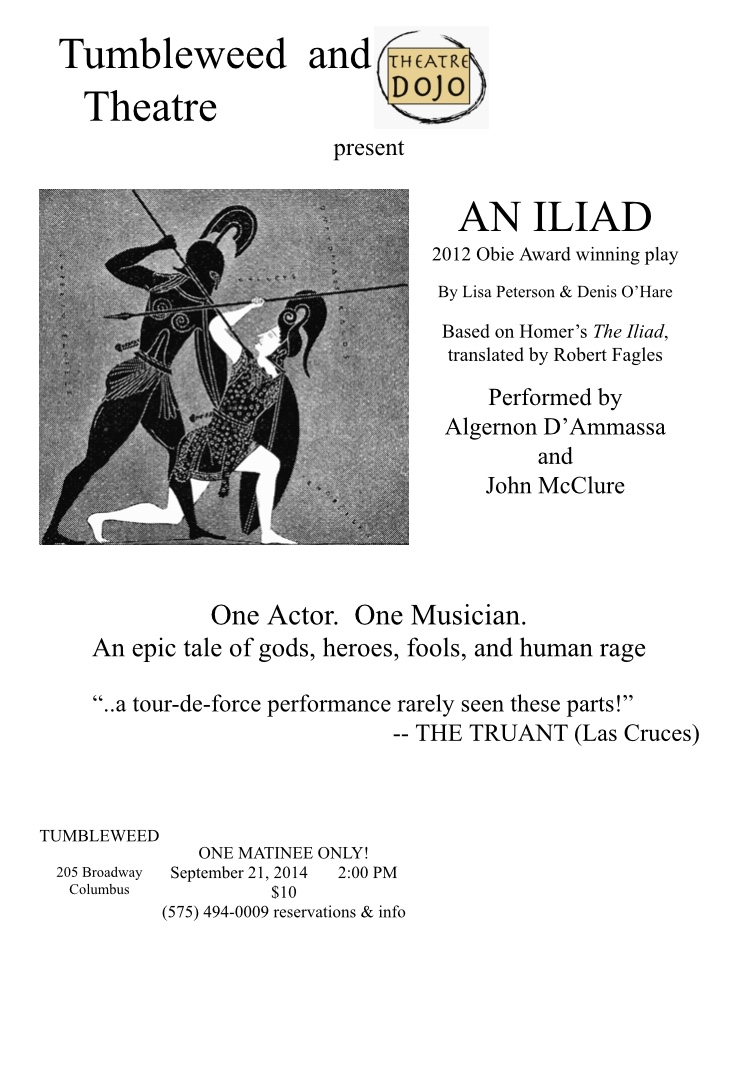 An epic tale of Gods, heroes, fools and human rage 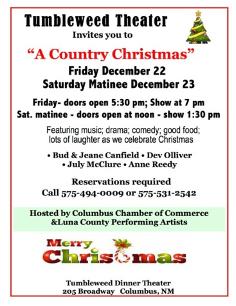 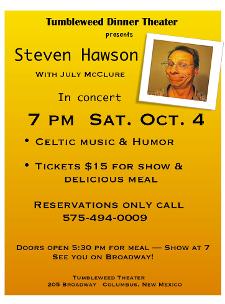 Tumbleweed members, through hard work and dedication, have brought a lot of laughter, joy and entertainment to an audience
mainly from Deming NM, Las Cruces NM, El Paso TX and Silver City NM. We welcome you to visit our perfect theatrical address,
"on Broadway", of course, in downtown Columbus, New Mexico.
Tumbleweed Theater,205 Broadway in the  historic Village of Columbus, NM

If it's music you are looking for...

Get to know the Spring Canyon Band

A group of friends with strong roots in Luna County New Mexico, Paul Smith, Deborah Olliver and July McClure perform with other musicians at festivals, concerts, special events and in local theater productions throughout the area.
These good friends enjoy playing music together and would like to share their unique and exciting sounds
with you through their newly established band of three, The Spring Canyon Band.

Deborah Olliver was raised in a military family and lived all over the world growing up, she even spent more than five years in Panama. Deborah studied piano from the ages of 6 -20, then switched over to finger picking guitar. She was an  on-the-road musician with her husband for 25 years. She also spent 10 years in Mexico teaching while doing shows and concerts. Additionally, Deborah has written many songs and instrumentals for guitar.

Paul Smith was born and raised in the desert southwest and has been performing in the boot heel for 40 years. Equally adept at piano, guitar and voice Paul has taught guitar and mariachi for the Deming Public Schools and guitar at NMSU. Paul has recorded a few songs of his own and was recently used in a Harley Davidson radio ad.
Paul continues to write and record songs inspired by his life in the desert.

July McClure was born in Washington D.C. to musician parents. She grew up and went to college in Colorado. She spent some years in Los Angeles, CA and then found her life in New Mexico, she says "it seems like 100 years ago". An accomplished singer and bass player, July has performed across the U.S. for most of her adult life. Her career started in Los Angeles on the weekly McKelvey and Bob Comedy Show on KPFK Radio.
July has lived in Columbus NM for years now and is known locally as a musician, actress, activist,
fire fighter and photo journalist.
July is co-owner of the Tumbleweed Dinner Theater and has had lead roles in more than 40 Luna County theatrical productions. Additionally, she has had small speaking parts and crewed on several films, most recently as an extra in
50 to 1, a feature film about the New Mexico gelding who came from out of nowhere to win the 2009 Kentucky Derby.
July has written musical scores and has done voice overs for documentaries and Indie Films.
She was previously a member of the local band Desert Trio.

Spring Canyons music defies a specific genre. They perform folk, blues, country, bluegrass and soft rock with a special emphasis on their original compositions.  Their shows are peppered and seasoned with their own unique brand of comedy. There is a lot of laughing at a Spring Canyon performance and they win new fans everywhere they perform.

Located in the heart of the historic Village of Columbus, NM

inside the tumbleweed theater

Prepare to be delighted